The imminent signing of a bill into law by U.S. President Barack Obama will put an end to the restrictive “six pack” rule that has dealt an estimated $2 billion blow to the U.S. Virgin Islands’ charter yacht industry.

More specifically, the change in law will allow uninspected vessels under 80 feet, which have been certified for MCA (Maritime and Coastguard Agency) standards in the neighboring British Virgin Islands, to carry up to 12 passengers. This opens the door for charter yacht operators who used to homeport in the USVI and have moved to the BVI to come home.

“This is a step toward equity for our charter industry and an economic boost for our maritime industries as a whole,” U.S. Virgin Islands’ Governor John P. de Jongh said. “The restriction to six passengers has been a long-outstanding issue that has put us at a competitive disadvantage to the rest of the region and especially with a niche that we know is attracted to our natural resources and all that we have to offer.

“This amendment is the first of a number of actions to let this market know that we are open for business and that we want their business,” he said. 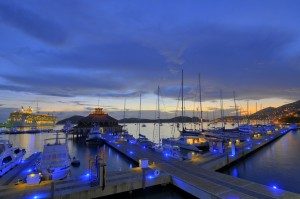 The six-pack rule, or limit on uninspected passenger yachts in U.S. waters to carry no more than six paying passengers, was put in place as part of the Passenger Vessel Safety Act of 1993. This act was meant to reduce the incidence of marine casualties via improved vessel and operator enforcement programs, standardized equipment, and punitive measures for non-compliance.

Unfortunately, the regulatory changes resulted in competing non-US jurisdictions such as the British Virgin Islands taking advantage of the legal inequity to increase their market share. The USVI’s maritime industry declined in its economic contribution from upwards of $130 million annually in the mid-1980s to current estimates over the past several years at about $30 million yearly.

This problem was not a fast one to solve. One major reason is that the USVI does not have a vote in the U.S. Congress. Former Delegate to Congress Donna Christensen tried to garner floor assistance for several years, however it wasn’t until Congressman Bill Shuster, chairman of the House of Representatives’ Committee on Transportation and Infrastructure who has a subcommittee on USCG and Marine Transportation, met during the summer of 2013 with members of the V.I. Marine Economic Development Council.

This support was matched equally from the U.S. Senate by Sen. Jay Rockefeller, chairman of the Senate Committee on Commerce, Science and Transportation, who personally guided Senate Bill S.2444, the Coast Guard Reauthorization Act of 2014, successfully through the U.S. Senate and House of Representatives on Dec. 10.

Exemption from the six-pack rule means new opportunities in the coming year to operators such as Capt. Vince and Linda Stracener, who charter the 72-foot Irwin sailing yacht Drumbeat 1.

“We are an eight-passenger boat so the exemption will help us in a number of ways,” Capt. Stracener said. “Our guests can fly into St Thomas, which is usually cheaper than flying into Beef Island. They also won’t miss out on St John, which is our favorite island. There is also a lot of great dives in the USVI that they won’t miss out on if they are scuba divers. The provisioning is much cheaper in St Thomas than in Tortola as well, thus saving us hundreds of dollars over a year.”

“While we are optimistic that the existing BVI crewed yacht fleet, having already obtained all of their requisite licenses and permits, will continue to be BVI based, it certainly does open the door for those yachts that carry more than six passengers to be flexible in their pick-up port,” said Ruth Ross, chairwoman of the Charteryacht Society of the BVI, based in Tortola. “In addition, it is a perfect opportunity for all of us to increase charter guest numbers to the entire region.”

Carol Bareuther is a freelance writer in St. Thomas. Comments on this story are welcome at editorial@the-triton.com.